Olympic Silver for a Painting

This silver Olympic medal, held in our Yeats Archive, was awarded to Jack B. Yeats (1871-1957) at the Paris Olympics in 1924. While best known for its sporting events, art competitions formed part of the Olympic Games between 1912 and 1948 . Medals were awarded to works of art inspired by sport in five different categories: architecture, literature, music, painting and sculpture.

Yeats won this medal for The Liffey Swim painted in 1923.  His painting captures the atmosphere and thrill of an event that has been part of Dublin’s annual sporting calendar since 1920. His depiction of the occasion also represents a return to the sporting themes that had inspired much of his early work. Only thirty-four competitors took part in the Liffey swim race in 1923, which started at the Guinness barge at Victoria Quay and finished a mile and down river.

Ireland competed as the Irish Free State for the first time at the Olympic Games of 1924 in Paris and Ireland’s first medals as an independent nation came in the Art Competitions of the Olympiad.  Yeats won silver for The Liffey Swim, and a bronze medal for literature was won by the Irish poet Oliver St. John Gogarty and his poem Ode to the Tailteann Games. The poem established a link between Ireland’s ancient Tailteann Games and the Olympic Games. Ireland came joint fourth along with Denmark in the arts section of the games.

The Liffey Swim was exhibited in the Royal Hibernian Academy in Dublin the following year, with a £300 price tag. The painting was sold to the Haverty Bequest Fund for £250, who presented the painting to the National Gallery of Ireland in 1931. 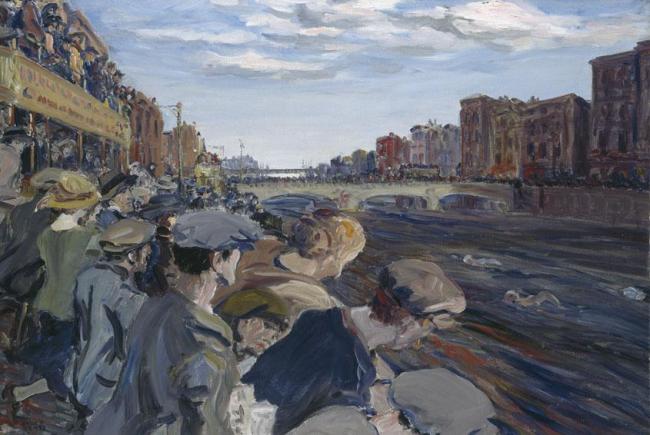