In the mid-nineteenth century, photography became an important tool for European artists to study and pictorialise the world around them. Photography appeared in Ireland around the 1840s, and by the 1870s Dublin boasted numerous amateur clubs and dozens of photography studios. Irish artists could purchase, commission and take their own photographs, and use them as sources of inspiration for their paintings.

The Irish painter Walter Osborne (1853-1903) kept a collection of photographs, mainly black-and-white prints showing scenes of life in Dublin City and its notable landmarks. He used these photographs, like his sketches, to record and study scenes of everyday life. Sometimes they were the primary source for a painting, as was the case with a photograph he owned of a street scene near St. Patrick’s Cathedral.

Although scenes of everyday life were popular with late-nineteenth century  photographers, they were staged mostly, due to the inability of early photography to capture movement. Some of Osborne’s photographs, including this picture of a street scene near St Patrick’s Cathedral, however, present a more natural image. The photograph has no strong focal point and the people are blurred as they go about their business. Such details could be seen as weaknesses in the image, signs of an amateur photographer. However, they may also suggest the photographer’s less commercial and more documentary objectives. This may even be a photograph taken by Osborne, himself.

Osborne sketched in the vicinity of St Patrick’s Cathedral in 1892. His sketch, Christchurch Cathedral, Dublin from Patrick Street (NGI.2539), was made in the same location as the photograph, but looks the opposite direction, uphill and towards Christ Church Cathedral. It was, however, the photograph rather than his sketches that Osborne selected to use as the primary source for his oil painting Saint Patrick’s Close, Dublin.

A direct comparison between the photograph and the finished oil painting reveals the importance of the original image in the creation of the artwork. In addition to Osborne’s faithful reproduction of the overall composition, he represented accurately details such as the profile of the building lintels; the structure of the individual canopies; and even the position of the horse-drawn carriages. He did however, exaggerate the scale of the cathedral’s tower with spire, granting it a more imposing presence in the painting’s composition. He also populated the street scene with a number of children that are not present in the photograph, thereby introducing a narrative quality to the painting that is absent from its original source. 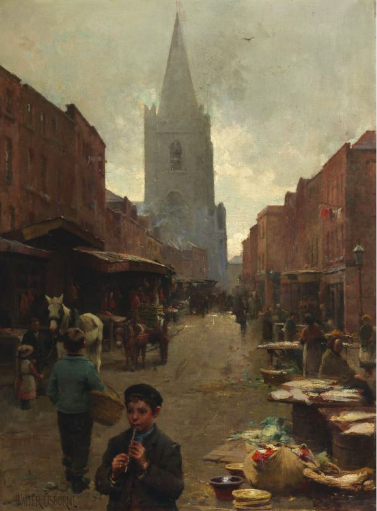