Elizabeth (Betty) Webb trained at the Royal Hibernian Academy (RHA) schools in the early 1930s. Her tutors included Sean O’Sullivan (1906-64) and Dermod O’Brien (1865-1945), the head of the schools. She exhibited at the RHA’s annual exhibition in 1935, but abandoned her career as an artist soon after.

In 1933, O’Brien wrote to Webb to congratulate her on her recent engagement, while she was still a student. ‘It is absolutely essential that I should get some sort of a letter to you before you have escaped from my school clutches’, he wrote, ‘I knew that you were certain to abandon the serious occupation of painting for the mere frivolity of marriage: that is the sad penalty attached to most pretty girls’. ‘The man has to go to work’, he stated and recommended that Webb, to avoid ‘gossip and scandal’ should  ‘escape to your pencil & brush’. 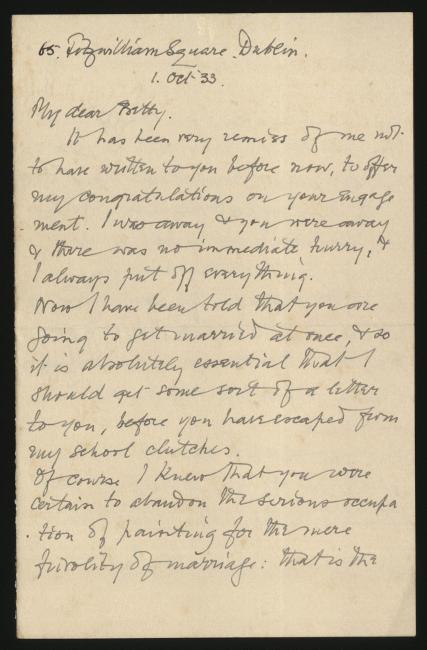 O’Brien was, at this time, one of the most respected and powerful artists in Ireland. His letter to Webb shows a degree of familiarity with her personal life and presumptuousness that is at odds with his professional role. The document, however, gives a rare insight into the career prospects of one of the many female students who trained in visual art at that time. After she is married, O’Brien’s expectations of Webb amount to ‘good resolutions which will … end in regrets’. The professional challenges Webb faced as a married woman reflect the broader social and professional restrictions placed on women in the early decades of the Irish Free State. The Irish Government’s 1924 ‘Marriage Bar’ required single women to resign from their job upon getting married and disqualified married women from applying for vacancies. This was followed by the Employment Act of 1935, which allowed the Minister for Industry and Commerce to limit the number of women working in any industry.

O’Brien’s letter to Webb and archives such as this are valuable historical documents that can prompt us to think more critically about the history of Irish art; how it evolved; how it is documented; and how it is told. In 2014, artist Sarah Pierce explored these questions in her artwork My Dear Betty, which employed Webb's archive at the ESB CSIA as a source for a series of prints dealing with the nature of archives and the canon of art. 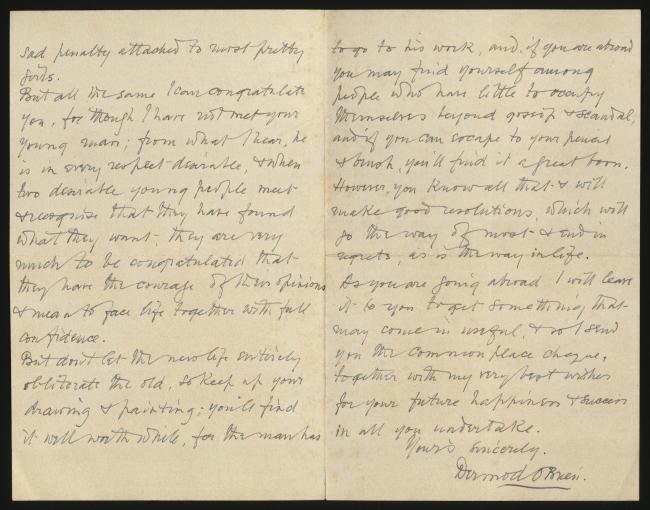